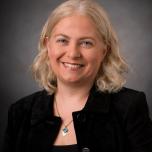 Aylin Yener holds the Roy and Lois Chope Chair in Engineering at The Ohio State University, Columbus Ohio, since 2020, where she is a professor of Electrical and Computer Engineering, professor of Integrated Systems Engineering and professor of Computer Science and Engineering. Until 2020, she was a University Distinguished Professor of Electrical Engineering and a Dean’s Fellow at The Pennsylvania State University, University Park, PA, USA, where she joined the faculty as an assistant professor in 2002. She was a visiting professor of Electrical Engineering at Stanford University in 2016-2018 and a visiting associate professor in the same department in 2008-2009. Her current research interests are in information security, green communications, caching systems, and more generally in the fields of information theory, communication theory and networked systems. She received the NSF CAREER Award in 2003, the Best Paper Award in Communication Theory from the IEEE International Conference on Communications in 2010, the Penn State Engineering Alumni Society (PSEAS) Outstanding Research Award in 2010, the IEEE Marconi Prize Paper Award in 2014, the PSEAS Premier Research Award in 2014, the Leonard A. Doggett Award for Outstanding Writing in Electrical Engineering at Penn State in 2014, the IEEE Women in Communications Engineering Outstanding Achievement Award in 2018, and the IEEE Communications Society Best Tutorial Paper Award in 2019. She has been a distinguished lecturer for the IEEE Information Theory Society (2019-2020), the IEEE Communications Society (2018-2019) and the IEEE Vehicular Technology Society (2017-2021). Dr. Yener is serving as the president of the IEEE Information Theory Society in 2020. Previously she was the vice president (2019), the second vice president (2018), an elected member of the Board of Governors (2015-2018), and the treasurer (2012-2014) of the IEEE Information Theory Society. She served as the Student Committee Chair for the IEEE Information Theory Society (2007-2011), and was the co-Founder of the Annual School of Information Theory in North America in 2008. She was a Technical (Co)-Chair for various symposia/tracks at the IEEE ICC, PIMRC, VTC, WCNC, and Asilomar in 2005, 2008-2014 and 2018. Previously, she served as an Editor for the IEEE TRANSACTIONS ON COMMUNICATIONS (2009-2012), an Editor for the IEEE TRANSACTIONS ON MOBILE COMPUTING (2017-2018), and an Editor and an Editorial Advisory Board Member for the IEEE TRANSACTIONS ON WIRELESS COMMUNICATIONS (2001-2012). She also served a Guest Editor for the IEEE TRANSACTIONS ON INFORMATION FORENSICS AND SECURITY in 2011, and the IEEE JOURNAL ON SELECTED AREAS IN COMMUNICATIONS in 2015. Currently, she serves as a Senior Editor for the IEEE JOURNAL ON SELECTED AREAS IN COMMUNICATIONS and is on the Senior Editorial Board of the IEEE JOURNAL ON SELECTED AREAS IN INFORMATION THEORY.