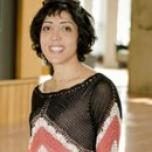 From 2002 to 2004, Tara Javidi was an assistant professor at the Electrical Engineering Department, University of Washington, Seattle. In 2005, she joined the University of California, San Diego, where she is currently a professor of electrical and computer engineering.