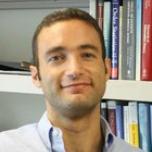 Osvaldo Simeone is a Professor of Information Engineering with the Centre for Telecommunications Research at the Department of Informatics of King's College London. He received an M.Sc. degree (with honors) and a Ph.D. degree in information engineering from Politecnico di Milano, Milan, Italy, in 2001 and 2005, respectively. He was previously a Professor with the Center for Wireless Information Processing (CWiP) at New Jersey Institute of Technology (NJIT). His research interests include wireless communications, information theory, optimization and machine learning. Dr Simeone is a co-recipient of the 2017 JCN Best Paper Award, the 2015 IEEE Communication Society Best Tutorial Paper Award and of the Best Paper Awards of IEEE SPAWC 2007 and IEEE WRECOM 2007. He was awarded a Consolidator grant by the European Research Council (ERC) in 2016. His research has been supported by the U.S. NSF, the ERC, the Vienna Science and Technology Fund, as well by a number of industrial collaborations. He currently serves as an Editor for IEEE Transactions on Information Theory. Dr Simeone is a co-author of a monograph, an edited book published by Cambridge University Press and more than one hundred research journal papers. He is a Fellow of the IEEE.