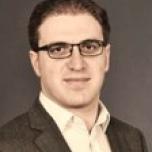 Deniz Gunduz  received the B.S. degree in electrical and electronics engineering from METU, Ankara, Turkey, in 2002, and the M.S. and Ph.D. degrees in electrical engineering from  New York University  Polytechnic School of Engineering , Brooklyn, NY in 2004 and 2007, respectively. He is currently a Professor of Information Processing in the Electrical and Electronic Engineering Department of  Imperial College London. Previously he was a Research Associate at  CTTC , Barcelona, Spain, a Consulting Assistant Professor at the Department of Electrical Engineering,  Stanford University , and a postdoctoral Research Associate at the Department of Electrical Engineering, Princeton University. He is also a part-time faculty member at the University of Modena and Reggio Emilia, Italy, and has held visiting positions at University of Padova (2018-2020) and Princeton University (2009-2012).

His research interests lie in the areas of communications and information theory, machine learning, and privacy.