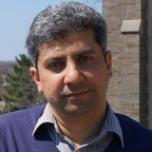 Mohammad Ali Maddah-Ali  received the B.Sc. degree from Isfahan University of Technology, and the M.A.Sc. degree from the University of Tehran, both in electrical engineering. From 2002 to 2007, he was with the Coding and Signal Transmission Laboratory (CST Lab), Department of Electrical and Computer Engineering, University of Waterloo, Waterloo, ON, Canada, working toward the Ph.D. degree. From 2007 to 2008, he worked at the Wireless Technology Laboratories, Nortel Networks, Ottawa, ON, Canada.  From 2008 to 2010, he was a post-doctoral fellow in the Department of Electrical Engineering and Computer Sciences at the University of California at Berkeley. Since September 2010, he has been at Nokia Bell Laboratories,  Holmdel, NJ, as a communication network research scientist.