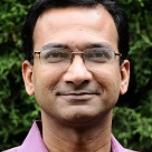 Rajesh Sundaresan received the B.Tech. degree in electronics and communication from the Indian Institute of Technology Madras, the M.A. and Ph.D. degrees in electrical engineering from Princeton University in 1996 and 1999, respectively. From 1999 to 2005, he worked at Qualcomm Inc. on the design of communication algorithms for wireless modems. Since 2005, he has been with the Department of Electrical Communication Engineering, Indian Institute of Science, Bangalore. He visited the Coordinated Science Laboratory at the University of Illinois, Urbana-Champaign, in 2012-2013 on a Indo-US Science and Technology Forum Fellowship. His interests are in the areas of communication networks and information theory. He was an associate editor of the IEEE TRANSACTIONS ON INFORMATION THEORY during the period 2012-2015.