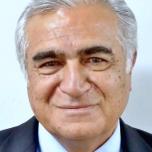 received the Ph.D. degree in electrical engineering from the University of California, Los Angeles (UCLA), Los Angeles, CA, USA, in 1978. Since then, he has been with the Jet Propulsion Laboratory (JPL), California Institute of Technology (Caltech), Pasadena, CA, USA, where he is a JPL Fellow and Senior Research Scientist. At JPL, he has been involved with developing state-of-the-art technology for advanced deep-space communications systems and future NASA space exploration. He is also an Adjunct Professor with the Department of Electrical and Computer Engineering, UCLA. Since 1986, he has taught graduate courses in communications and coding at UCLA and Caltech. He has published more than 275 papers, coauthored a book entitled  An Introduction to Trellis Coded Modulation with Applications , contributed to three other books, and holds 25 U.S. patents in the aforementioned areas. He was a co-recipient of the 1988 Paper Award of the IEEE Transactions on Vehicular Technology. He was a co-recipient of the IEEE Communications Society & Information Theory Society Joint Paper Award in 2008. He was a co-recipient of the 2018 the IEEE Aerospace Conference Best Paper Award . The IEEE Communication Society has selected one of his papers for inclusion in a book entitled  The Best of the Best: Fifty Years of Communications and Networking Research , containing the best 56 key research papers ever published in the society’s 50-year history. He is a recipient of the 2014 IEEE Alexander Graham Bell Medal. He has received over 50 NASA Tech Brief Awards and a NASA Exceptional Engineering Achievement Medal in 1996. He served as an Area Editor for the IEEE Transactions on Communications from 1989 to 1996.