Skip to main content
Raymond W. Yeung Named Recipient of 2022 Claude E. Shannon Award
The IEEE Information Theory Society is pleased to announce that Raymond W. Yeung is the recipient of the Claude E. Shannon award for consistent and profound contributions to the field of information theory. He will deliver his Shannon Lecture at ISIT 2022.
Jul 20, 2021
Brian
Kurkoski 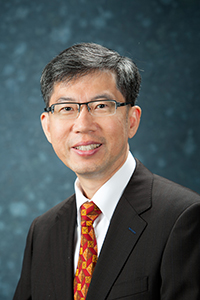 Raymond W. Yeung has been named the recipient of the 2022 Claude E. Shannon Award for consistent and profound contributions to the field of information theory.

Raymond W. Yeung received the BS, MEng and PhD degrees in electrical engineering from Cornell University in 1984, 1985, and 1988, respectively. He joined AT&T Bell Laboratories in 1988. Since 1991, he has been with CUHK, where he is currently Choh-Ming Li Professor of Information Engineering. A cofounder of the field of network coding, he has been serving as Co-Director of the Institute of Network Coding since 2010. He is the author of the books A First Course in Information Theory (Kluwer Academic/Plenum Publishers, 2002) and Information Theory and Network Coding (Springer 2008), which have been adopted by over 100 institutions around the world. In spring 2014, he gave on Coursera the first MOOC in the world on information theory that reached over 25,000 students. Since then, the MOOC has been offered regularly on Coursera and other platforms. His research interest is in information theory and network coding. He was a consultant in a project of Jet Propulsion Laboratory for salvaging the malfunctioning Galileo Spacecraft.

2022 Chicago Workshop on Coding and Learning
Aylin Yener Has Been Elected To Be the Next IEEE Division IX Director
2022 Information Theory Society Paper Award Recipients Named
Contributions for Society Newsletter
JSAIT CFP: The Role of Freshness and Semantic Measures in the Transmission of Information for Next Generation Networks
ISIT 2023: Submission Site is Open
Submission Deadline Approaching: JSAIT Issue on Foundations of Sensing
JSAIT CFP: Causality: Fundamental Limits and Applications