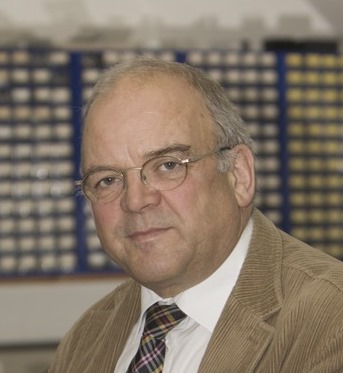 The Aaron D. Wyner Distinguished Service Award honors individuals who have shown outstanding leadership in —and provided long-standing exceptional service to — the Information Theory Community. Han Vinck  is receiving the award for his longstanding contributions with IEEE chapters, promotion of information theory and its applications, and organization of conferences and workshops.

A.J. Han Vinck is a senior professor in Digital Communications at the  University of Duisburg-Essen, Germany, since September 2014 and a member of  the Digital Signal Processing group at the Electrical Engineering  Department. He is an adjunct professor at the National Cheng Kung University  Tainan, Taiwan and honorary professor at the University of Johannesburg,  South Africa. He was  in the Institute for Experimental Mathematics at the  University of Duisburg-Essen, Germany, since 1990, specializing in  Information and Communication theory, Coding and Network aspects in digital  communications.  Professor  Vinck held positions of professional responsibility including the  Director of the Institute for Experimental  Mathematics in Essen, founding  Chairman of the IEEE German Information Theory chapter, President of the  IEEE Information theory Society (2003) and President of the Leibniz  foundation for the stimulation of research in the field of Information  theory, Biology and Neuroscience.  He received a number of accolades including the election by the IEEE as  Fellow for his "Contributions to Coding Techniques", selected as  Distinguished Lecturer for the Communications Society of the IEEE, the IEEE  ISPLC 2006 Achievement award for contributions to Power Line Communications,  and the SAIEE annual award for the best paper published in the SAIEE Africa  Research Journal in 2008. He was awarded the 2015 Aaron D. Wyner  Distinguished Service Award for outstanding leadership in, and provided  long-standing, exceptional service to, the Information Theory community.  He is instrumental in the organization of research forums including the IEEE  Information Theory workshops (Veldhoven, 1990) and symposia (ISIT 1997, Ulm)  Japan-Benelux workshops on Information theory (now Asia-Europe workshop on  "Concepts in Information Theory") and the International Winterschool  on  Coding and Information theory in Europe. He is author of the book "Coding  Concepts and Reed-Solomon Codes".