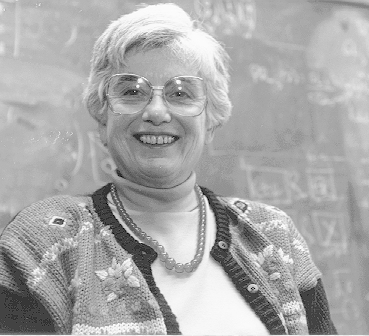 Vera Stepen Pless passed away at her home in Oak Park, Illinois on March 2, 2020, a few days short of her 89th birthday. She was a leading expert in the theory of error-correcting codes, being one of the very few women doing research in coding theory in its early years.

Vera Stepen was born in Chicago, Illinois on March 5, 1931, the daughter of Russian Jewish immigrants. She left high school after two years to pursue a “great books” program at the University of Chicago, graduating in three years. In 1952 she married Irwin Pless and completed an M.A. also from the University of Chicago. Subsequently she joined a physics group at the university but soon afterwards received a fellowship from Northwestern University. Vera moved with her husband to Boston and completed her Ph.D. long-distance as a ring theory student of Alex Rosenberg, defending her dissertation [10, 11] two weeks before the birth of her first child.

In 1963 Vera joined the Air Force Cambridge Research Laboratory (AFCRL) to work in the new research area of error-correcting codes and continued to work there for ten years, resigning after the Department of Defense was prohibited from doing pure research. Upon leaving the AFCRL, she became a research associate at the Massachusetts Institute of Technology. In 1975 Vera was appointed full professor in the Department of Mathematics, Statistics and Computer Science at the University of Illinois Chicago where she taught until her retirement in 2006.

Vera Pless made significant, original, and lasting contributions to the study of error correcting codes. In 1963, she published her first major work [12] in coding theory presenting what are now called the Pless power moments relating the weight distributions of a linear code to that of its dual. These power moments are equivalent to the MacWilliams identities published by F. Jessie MacWilliams [9] in the same year. Over the next few years, she helped establish the uniqueness of the Golay codes [14] and discovered what are now called the Pless symmetry codes [16].

Vera was among the first to explore the classification of maximal self-orthogonal and self-dual codes with her presentation of these binary codes up to length 20 in [15]. She followed this with the classification of self-dual codes of moderate lengths over various fields in succeeding publications, some with authors such as John H. Conway and Neil J. A. Sloane; see for example [3]. She developed mass formulas [13] that verify completeness of the classifications; she even modified the GROUP computer system to create the Combinatorial and Algebraic Machine Aided Computation (CAMAC) system [17] to assist in the computations.

Teaching both research specialists and aspiring coding theory students was important to Vera. In 1982, she published her first coding theory book Introduction to the Theory of Error Correcting Codes [19], currently in its third edition, which provided a gentle introduction to the field. In 1992 Vera began work as co-editor of the two volume Handbook of Coding Theory [20]. This 25 chapter, 33 author Handbook, which covered a wide range of topics on the frontiers of research, was published six years after the project began. Upon its completion, the co-editors decided it would be appropriate to co-author an extensive textbook that could provide in part a bridge to the Handbook. The result was Fundamentals of Error Correcting Codes [6] published in 2003.

During the mid 1980s Vera served on the Board of Governors of the Information Theory Society. In 2012 she became a fellow of the American Mathematical Society. During her career she published over 120 journal articles, 21 appearing in IEEE Transactions on Information Theory.

Vera is survived by her three children Naomi, Daniel, and Ben along with four grandchildren Lilah, Evie, Rebecca, and Jesse.

On a personal note, I had the privilege of working with Vera for over 30 years as our universities were only a subway ride (with one transfer) apart. Vera was always inspirational with her wealth of knowledge and intuitive insight into coding problems. In a very informal way, she taught me much coding theory as we sat in her office, probably not realizing how inﬂuential these conversations were. Vera loved classical music and reading; she loved her children and grandchildren. And she loved her students. On my visits, we would often go to lunch, usually at Vera’s favorite Thai restaurant, inviting one or two students; you could never move fast enough as she would quickly pick up the check. I served on the Ph.D. committees of a number of her students. When members would ask the student a question, Vera could barely restrain herself (and often did not) from answering for them – she so much wanted her students to succeed. In the days following her passing, I received emails from coding theorists whose research careers were nudged, and even re-directed, along new paths based on interactions with Vera. Her presence will be greatly missed.