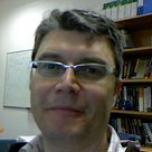 Ignacio Santamaría (SM’05) received his Telecommunication Engineer Degree and his Ph.D. in electrical engineering from the Polytechnic University of Madrid, Spain in 1991 and 1995, respectively. In 1992 he joined the Departament of Communications Engineering, Universidad de Cantabria, Spain, where he is a Full Professor since 2007. He is the Head of the Advanced Signal Processing Group and his research is in the general area of statistical signal processing, communication systems, and machine learning. Using theories and tools from adaptive learning, multivariate statistical analysis, and information theory, his research group is investigating various practical problems that arise in wireless communication systems and sensor networks. As a result of these research lines, he has co-authored more than 50 publications in refereed journals and over 100 peer-reviewed papers in international conferences. Further, he has been involved as principal investigator on a number of national and EU funded projects. He held visiting positions at the Computational NeuroEngineering Laboratory (CNEL), University of Florida; and at the Wireless Networking and Communications Group, The University of Texas at Austin. He is a Senior Member of IEEE and participates in the Signal Processing, Computational Intelligence, Information Theory, and Communications Societies. He has served as a reviewer and program committee member for numerous conferences and journals. Since 2009 is is a member of the IEEE MLSP Technical Committee. He was a co-recipient of the EEEfcom innovation award 2008 sponsored by Agilent and Rhode & Schwarz.