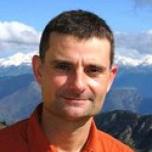 Javier Rodríguez Fonollosa received the telecommunication engineering degree from the Universitat Politècnica de Catalunya , Barcelona, Spain, in 1988, and the Ph.D. degree in electrical and computer engineering at Northeastern University , Boston, MA, in 1992.

In 1989 he held a visiting appointment at the European Space Agency Centre in The Netherlands. From the Fall of 1989 until 1992 he was Research Assistant at Northeastern University , Boston, MA and the University of Southern California , Los Angeles, CA, where, upon completion of his Ph.D. degree, he became Research Associate. In 1993 he joined the department of Signal Theory and Communications of the Universitat Politècnica de Catalunya , where he became Associate Professor in 1996 and Professor in 2003.

In 1995 he lead UPC's participation in the European Commission funded ACTS Mobile projects TSUNAMI(II) and SUNBEAM that included the analysis of adaptive antennas in 2on and 3rd generation cellular mobile communication systems. Since January 2000 until 2003 he was technical and project coordinator of the IST projects METRA and I-METRA dedicated to the introduction of multi-antenna terminals in UMTS and Systems beyond 3G. Since January 2006 to December 2008 he coordinated the Sixth Framework Programme IST project SURFACE which evaluated the performance of a generalized air interface with self-configuration capabilities. In November 2006 he initiated the coordination together with Josep Vidal of the 5 year Type C-Consolider project Fundamental bounds in Network Information Theory of the National Research Plan of Spain.

Since December 2008 he is the Coordinator of the CONSOLIDER-INGENIO 2010 Foundations and Methodologies for Future Communication and Sensor Networks ( COMONSENS ), a 5 year € 3.5 Million effort of 86 researchers belonging to 10 universities and research centers in Spain.

He has participated as a panelist in the National Science Foundation (NSF) evaluation committee of Wireless Information Technology and Networking and on a regular basis for the European Commission in the evaluation of proposals and technical verification of projects submitted to the Fifth and  Sixth Framework Programme . In June 2008 he participated in the  KTH International Research Assessment Exercise 2008 as a member of the Information and Communication Systems panel. He also participated in the Research Evaluation of Aalto University as a member of the Computer Science and Information Technology panel and in the priority program " Communications in Interference Limited Networks (COIN) " of the Deutsche Forschungsgemeinschaft (German Research Foundation) in June 2009.

He was department head of the  Signal Theory and Communications department of UPC from October 2006 to January 2010. In the Spring of 2009 he coordinated, together with Alba Pagès , the successful ERASMUS MUNDUS 2009-2013  Master of Science in Research on Information and Communication Technologies (MERIT) EMMC Joint Master Program proposal.

Since February 2010 he is manager of the Communications and Electronic Technologies (TEC) area of the National Research Plan of Spain of the Ministry of Science and Innovation .