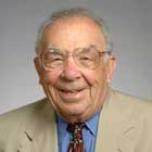 Professor Fano chaired the Centennial Study Committee of the Department of Electrical Engineering and Computer Science whose report, "Lifelong Cooperative Education," was published in October, 1982.

Professor Fano was born in Torino, Italy, and did most of his undergraduate work at the School of Engineering of Torino before coming to the United States in 1939. He received the Bachelor of Science degree in 1941 and the Doctor of Science degree in 1947, both in Electrical Engineering from MIT. He has been a member of the MIT staff since 1941 and a member of its faculty since 1947.

During World War II, Professor Fano was on the staff of the MIT Radiation Laboratory, working on microwave components and filters. He was also group leader of the Radar Techniques Group of Lincoln Laboratory from 1950 to 1953. He has worked and published at various times in the fields of network theory, microwaves, electromagnetism, information theory, computers and engineering education. He is author of the book entitled "Transmission of Information", and co-author of "Electromagnetic Fields, Energy and Forces" and "Electromagnetic Energy Transmission and Radiation". He is also co-author of Volume 9 of the Radiation Laboratory Series.

Professor Fano is a member of the National Academy of Sciences (1978) and of the National Academy of Engineering (1973) and a Fellow of the American Academy of Arts and Sciences (1958) and of the Institute of Electrical and Electronics Engineers (1954). He was the recipient of the 1976 Shannon Award of the IEEE Information Theory Society, and of the 1977 Education Medal of the IEEE. He was also the recipient of the 1969 prize "City of Columbus, Ohio" awarded by the International Institute of Communications and of the 1986 Colombian Gold Medal of the city of Genova, Italy. He served on the Board of Trustees of Bentley College, Waltham, Mass. from 1973 to 1993 and was for a number of years a member of its Executive Committee.