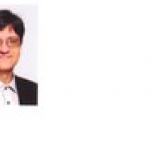 Dr. Venceslav Kafedziski received his Diploma and Master’s Degree from the Faculty of Electrical Engineering in Skopje, University Ss Cyril and Methodius, Skopje, Republic of Macedonia, and a Ph.D. Degree in Telecommunications and signal processing area from Arizona State University, Tempe, USA.

He has been with the Faculty of Electrical Engineering, Skopje in the period 1983-1990, and with Arizona State University in the period 1990-2000. In 2001 he rejoined the Faculty of Electrical Engineering in Skopje, and currently holds a position of full professor. He has been teaching undergraduate and graduate courses in the areas of digital communications, wireless communications, information theory, signal compression, signal processing for communications and statistical signal processing.

Dr. Kafedziski is a member of the Phi Kappa Phi. He has served as a Member of the Board of the Macedonian Society for ETAI from 2004 to 2008.

Dr Kafedziski visited Politecnico di Torino and Institute Eurecom during the summer of 2003 and summer of 2004 as a Tempus Individual Mobility Grant recipient and University of Maribor in the summer of 2008 as a participant in a Tempus project. He was a visiting researcher at the Institute Jozef Stefan, Ljubljana, Slovenia from April 1st to August 31st 2012.

Dr. Kafedziski served as the Head of the Working Group of the Agency of Electronic Communications of the Republic of Macedonia, which prepared the document “Guidelines for Introducing Fixed Wireless Access (WiMAX) in the 3.4-3.6 GHz Band in the Republic of Macedonia” in July 2006. He participated in the working groups that prepared “National strategy for the development of electronic communications with information technologies”, and “National broadband internet strategy”. Dr. Kafedziski was an invited lecturer at four ITU Workshops. Since 2008 he has been serving as the chair of the National standardization committee for electronic communications. He is a Senior Member of IEEE and the organizer of the IEEE Republic of Macedonia Section Information Theory Chapter.